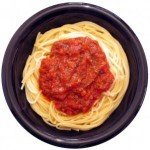 A while back, I read “How to Sell Anything to Anybody

” by Joe Girard and one concept that stuck in my head was his point about throwing spaghetti at a wall. Joe says “if you throw enough spaghetti against a wall, some of it will stick.” He used this point to describe his philosophy on cold calling — if you call enough people, someone will eventually listen to you. The concept can be used in other areas of business such as sales, pitching ideas and even looking for a job — if you contact enough people, you’ll eventually find someone who is interested in what you have to offer. But wait, there’s more…

There is some truth to the fact that the law of numbers can help you. After all, many businesses use bulk mailings as an inexpensive way to reach new clients — if 1% of the people the items are sent to respond, then it’s considered a big success. The problem is that the bulk approach may or may not work for your situation. The big risk of the bulk approach is that repeatedly sending out mailings may tarnish your image. In the case of postal mailings, you may look like an environmentally insensitive junk mailer while repeatedly sending email may make you appear to be a spammer.

That’s why it’s sometimes better to use a targeted approach. After all, you’re much better off with a targeted list of prospects so that you’re not wasting your time (and theirs) contacting people that are possible duds. Now this doesn’t mean only contact the people that have a 100% chance of being interested in what you’re offering, but it does mean eliminating the people who have a 100% chance of not being interested.

For example, I offer workshops for professional organizations and recently came across a list of 2400+ organizations in my area. I could have sat down at the phone for a month contacting all of these folks or sent them a bulk mailing hoping that one or two might look at it and hire me. But instead of doing that, I spent some time trimming the list down to the 400+ that I figured I had a shot with. The ones I eliminated were groups that were too small, didn’t host conferences, had no budget for workshops or weren’t a good fit for the topics I give workshops on.

This approach has been successful for me as I mainly talk to people who may have an interest in my services at some point. On one extreme, some folks will refer to me to other groups they know of that might be a better fit. On the other extreme, someone will say that they’re simply not interested.

Again, it all depends on your situation. The targeted approach works best when you have a clearly defined target audience for what you’re offering — and if you’re looking for a job or selling a business idea, you’ll probably fall into this category. The bulk approach works well if what you’re offering has global appeal such as a pizza place or generic cuisine restaurant.

Throwing Spaghetti at the Wall

One thought on “Throwing Spaghetti at the Wall”