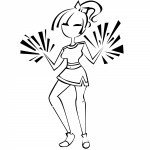 I figured this would be a great topic to kick off Super Bowl week. I once heard about a company that had multiple openings for similar positions and brought all of their candidates in for a day of interviewing at the same time. They had games and activities that the candidates worked on together — one such activity was creating a new cheer for the company. What was interesting is that some of the candidates figured that coming up with the best cheer, or at a least a cheer better than everyone else’s, would land them the job. Turns out it didn’t.

Interviews where all of the candidates are brought in together can be tricky – more so than even the dreaded “team interview”. On one hand, you at least know who you’re up against for the opening. But on the other, the way you present yourself and act around the other candidates says more about you than you realize. I once went on one such interview and found it to be weird. First, seven of us were all brought in to take a standardized test. It felt like I was taking the SATs all over again. A week later, we were all invited back to have lunch with the IT management team —all together.

When you’re in a situation like this, your natural inclination is to try to rise above your competition. You try to make yourself look like the strongest candidate and the others weaker. Being the strongest candidate is never a bad thing, and in some cases, it’s exactly what the employer is looking for. However, when employers use this technique, they are not just looking for people who perform well; they’re looking for people who perform well as part of a team.

Going back to the story about the cheerleading competition, while a good cheer wouldn’t hurt your chances of getting the job, focusing only on yourself would. In this particular instance, it wasn’t the cheers that were being watched by the hiring team — it was the audience. The people that were cheering on an encouraging the others got the highest marks while those that were clearly bored or not paying attention got the lowest. When you think about it, it kind of makes sense doesn’t it? If you were part of the hiring team, who would you prefer?

Needless to say, I didn’t realize this when I was part of what I call the “Team Player” interview. The other candidates that I was seated with during that lunch were all pretty quiet. I talked mostly to the management team, but in retrospect, what I should have done was interacted more with the other candidates and tried to bring the quiet ones out of their shells. Had I taken that approach, I think I would have come closer to landing the job.

So if you ever find yourself in this type of interview situation, remember to shine your best, but also try to bring out the best in the others. If the management teams sees you doing this, and sees you doing it genuinely, it’ll dramatically increase your odds of getting the job.