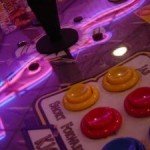 ) with friends from my neighborhood. At the time, I remember a few articles that I’d share with my parents about the benefits of playing video games – developing problem solving skills and increasing hand-eye coordination were the two biggest. But I learned something else that I didn’t realize until I was an adult – how to balance my life.

I don’t know that the intention of some of these video games were to help you sort out one of life’s biggest problems. I suspect this challenge was put in there to vary game play and add an additional layer of complexity to the games. But let’s take a quick stroll down memory lane and see how these games evolved and the lessons we can learn from them,

There were a number of games that allowed players to choose which powers would help them perform the best. This first appeared with role playing and adventure games where you could choose from different characters – each with strengths in different areas such as strength, speed, etc…. The lesson to be had here was that people are different and we all have our own unique strengths. But more so, just like life, you need to leverage your strengths to succeed in the video game.

Some games took it a bit further where you could create your own character. I remember a game called Baseball Stars

where you could create a player. Each player has different attributes such as hitting, fielding, running, etc. and you get to assign points to each of these attributes. Putting all your points on fielding would give you a player that performs well in field but rarely hits the ball. Just like life, you need to decide where to focus your efforts.

Many of these games had the concept of power ups – points that you could get to increase your attributes. For example, many racing games (before they licensed real car designs from Ferrari, Lamborghini, etc.) allowed you to customize your car. You’d be given ten points and could use them for speed, steering, braking, acceleration, etc.. Throughout the race, you might be able to pick up points in the form of power ups. Some games had generic power ups that you could choose which area you wanted to increase and sometimes you would get power ups to increase on area such as speed.

In life, we also have power-ups. Taking a class, learning a new system or using a tool may help you increase your effectiveness in a certain area.

Making sense of it all:

Life is full of challenges and we’re often struggling to balance the various areas of our lives. We’re often given a choice of which character we want to be – we could be the person that focuses solely on career with no social life, the person that focuses mainly on having a good family but struggles financially or someone in the middle. We all know people that do well with their career yet their never see their families and vice versa. Some people seem to have it all with a good career and a good family life while others put their efforts into one area and fail at both.

Like the video games, you need to decide where your focus should be. You might want play the game of life with all your points in your career when you start out so you can get to certain level of career success. Then you could change things up later on when you want to want to focus on social or family life.

Allocating your time is like allocating points for your character. You have 24 points each day so you might start out with eight for work, eight for sleep and eight for everything else. You can then tweak the way you allocate points based on your experiences. Maybe you can get away with five hours of sleep so you can use those extra three points for enhancing your career or split them among activities of your choosing.

Power ups are all around us. Something as basic as eating well can help sharpen your focus which can improve your performance in all areas of your life. Maybe you’ll learn a skill that helps you do your work more effectively. If your work is more physical in nature, an effective workout can increase your strength which could help you do more in less time,

There’s one area where life is not like video games and that is in how the game is scored. In a video game, there is one way to win (and while there are many ways to wind, there is a single outcome). In life, the ultimate goal varies from person to person. So the next time you sit down and play your Xbox

, note what you’re good at and think about how you can apply it to your life. You might be surprised at what you learn.