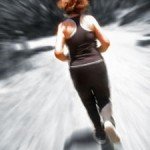 Last night when I was doing my cardio workout, I found myself getting tired towards the middle of it. Since it was my 12th day in a row of cardio, I started to wonder if it might be okay to do a 20 minute workout instead of a 40 minute workout. After all it was a Sunday night and I had had long day. But as I thought more about it, I decided that it was in my best interest to finish my workout.

I recalled my days as a high school wrestler – the good old days of sweating off two pounds each day in the sauna-like “wrestling room.” My coach would push us hardest at the end of the practice because that was when we moved beyond our limits. It worked well back then and this approach can still work for us today in almost all areas of our lives.

Yes, only I can take an experience while doing cardio and bring it back to public speaking. I once wrote about how some speaking experts falsely claim that public speaking is like riding a bike. In fact, public speaking is more like exercising – both require a lot of constant effort. The reason I brought up this point is that many people limit their speaking experiences to their comfort zone. People in Toastmasters often speak only at their club or at other Toastmasters related events. Others speak only when required to by their jobs.

It’s fine to stay within your comfort zone in an area as long as you’re not planning on growing in that area. For example, I may not be a great cook but there are a few things I make well. I don’t have the desire to be a great cook because I’m not a big food lover. So I see no point in me trying to learn how to cook new things as I’m happy with what I can cook now.

You can still grow without pushing yourself:

You can stay within your comfort zone and not push yourself and still grow – after all, doing something is better than nothing. Exercising five minutes per day is better than not exercising at all. Speaking to your Toastmasters club or to the same audience every couple months is exponentially better than not giving speeches at all. I’ve witnessed dozens of instances where two people have started together at the same level in pursuing a common goal and one had much better results because he or she pushed themselves harder than the other person.

When I wrestled in high school, I spent the off-season working out just so I could impress the gals when I went to the beach. Some of my other friends opted to go to wrestling camp (one guy went to several each summer). My friends who went to camp showed remarkable improvements from season to season.

When I was involved with Toastmasters, I saw people join the same club at the same time but within a year end up with different results. One person committed to doing at least one speech a month while the other would give a speech periodically, often canceling at the last minute due to not feeling prepared for the speech.

In the workplace, I’ve seen people start with the same company at the same level and end up with completely different results after a few years. One took the hard projects, worked longer hours and sacrificed personal time for professional development while the other did just the bare minimum.

I’ve seen people start businesses at roughly the same time and one doing significantly better than the other because of the extra efforts put in and the risks taken.

Success is more than pushing oneself:

While pushing yourself doesn’t guarantee success, it certainly ups your chances. Ultimately, your decisions and actions are what make or break your chances in any endeavor. Pushing yourself shows those around you that you’re serious, tells your subconscious that you’re capable of more than you originally thought and expands your skills, abilities and performance.

So the next time you’re tired and ready to quit early on, remember to keep on pushing yourself. Whether it’s an extra few steps on the treadmill, getting up in front of an audience you’re not familiar with or using your courage to approach someone and introduce yourself. Give yourself that extra push – you’ll be amazed at what happens.

Do You Push Yourself Enough?

5 thoughts on “Do You Push Yourself Enough?”