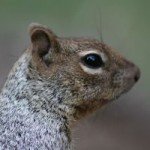 It seems like practically every day I drive by a dead squirrel in the road. I never thought much about it until yesterday when I slammed on my brakes to avoid hitting one. At first, I figured that it’s because there’s a lot of squirrels and a lot of cars where I live. But there are a lot of other animals too, and I rarely see them lying dead in the road. But watching this squirrel dart back and forth clued me in on the problem, and it’s a problem I see with a lot of people.

In my many years of driving, I’ve seen probably thousands of squirrels darting across busy roads. Most of the time, they could have escaped doom by doing one simple thing — being more decisive. A typical animal will start crossing the road, and if it sees a car coming at it it’ll turn back, otherwise it will continue across the road. Squirrels on the other hand dart out and then turn around when the see a car, then think they can beat it so go back across, then get almost to the other side and then turn back, and by then the car has stopped and they continue to other side. While this zig-zag pattern of unpredictability has its place in the world — this is what makes a ride like the Tower of Terror in Disney World exciting and unpredictable.

But in real life, doubting yourself and your decisions can figuratively (and in some cases literally) bring you the same result as the squirrel. There’s a saying in the military that goes something like “Any decision is better than no decision.” People can argue whether that’s appropriate for everyday life decisions — in the squirrel example, the squirrel would decide to cross the street and keep going whether or not a car was approaching.

Where the squirrel fails most of the time is with making multiple decision changes. Sometimes, we do that in our lives where we start something, decide to do something different, change our minds again and keep doing this until we get to the point where we’re frustrated. Had we just stuck with the first option, we would have completed it and would have had something to show for our efforts. But instead, we have nothing. One quality that you may have noticed that separates the successful from the unsuccessful (and even the happy from the unhappy) is decisiveness. If you know someone who’s going nowhere because they’re always chasing a different dream, this is exactly why.

So the moral here is to stick with your decisions. Yes, we make bad ones from time to time but we usually know right away when that happens — we see the car coming at us and know to turn back immediately. So the next time you make a decision, stick with it until completion. Don’t turn back at the first obstacle or challenge — follow through instead. You’ll be pleasantly surprised with the result.

Don’t Be a Squirrel

3 thoughts on “Don’t Be a Squirrel”