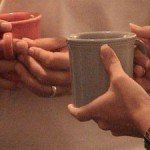 My first job out of college was at a media company and one of the things I found interesting was the addiction to coffee that many of my coworkers had. I stopped drinking coffee several years prior to that so I didn’t understand the need to add an extra thirty minutes to my morning commute for something the company offered for free in the kitchenette. So I asked a coworker why one would waste time and money in such a way and was enlightened by her answer.

She explained that there were two types of coffee -the good stuff that you get at the Starbucks and the like, and the cheap stuff that companies try to pass off as coffee (and a benefit to employees). Someone else got wind of this and decided to replace the coffee at work with the good stuff. They got a local premium coffee company to set up a station in the kitchenette at work with one of the highest quality coffees available and a number of their best flavors. One would think that this would have been a big hit but it only lasted for about a month.

It turns out that even though this coffee was better than the stuff people were picking up in the morning, people were still stopping on the way in for their coffee. There were two primary reasons for this. First, people were used to the coffee flavors that they typically got at Dunkin Donuts or Starbucks. But the other interesting comment was that people were just used to their routine of stopping for coffee on the way in to work. They left their house at certain time, drove the same route that took them to their favorite coffee drive-thru and continued on to work. So in many cases, it wasn’t the coffee that they were addicted to but the routine.

Routines are a powerful way to create a good habit. Many experts say that if you do something daily for 21 days, you’ll develop a habit. I believe it’s more like 30 because we’re all different and some people need a little longer for a habit to stick than others. I’ve used routines to create good habits a number of times. I’ve exercised every day for over a year so each night when I shut down my computer, I’ll do a few minutes of exercises if I haven’t already exercises for that day. I never forget to exercise because it’s part of my routine and I exercise every day regardless of whether it’s a weekday, weekend, holiday or even if I’m sick (my workout on a day I’m sick is significantly different than it would be on a day I’m well).

Habits are a great way to get things done and can help you with both your personal and professional goals. For example, if you’re trying to write a book it might be helpful if you could spend 30 minutes each morning or evening working on it. If you frequently skip breakfast and opt for junk food throughout the day, you could develop a habit of eating a healthy breakfast each morning. Take a look at your own goals and you can probably find something that could benefit from extra attention or efforts on a daily basis.

So here are some tips for developing a new habit:

So think about a couple new habits that might benefit you and consider adding them to your routine. You might be surprised at how much they can improve your life (I read somewhere that eating a salad every day can add two years to your life).

The Power of Habits