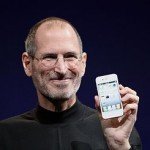 Out of all the famous entrepreneurs of the last fifty years, Steve Jobs is perhaps the most iconic. The legendary founder of Apple and Pixar who brought us Toy Story, the Macintosh and the iPhone had a cult-like following that even his more financially successful counterparts were envious of. It seemed like no matter what Steve did, he did it with his own unique style – including giving speeches.

Today’s young crop of technology entrepreneurs are often seen speaking in jeans, t-shirts and flip-flops, something that was unimaginable just a few years ago. Their thumbing of their noses towards on-stage dress codes and unflappable confidence was pioneered by Steve Jobs. While other corporate leaders would address their audiences in suits, Steve sported his relaxed dress code of jeans and a black turtleneck. It’s no wonder that today’s twenty-something year old CEOs are mimicking his casual presentation style and taking it to new levels.

Talks (“speeches” sound too formal) now feature more technology than ever — in terms of both the content of the talk and the method of the delivery. There are live demos on larger than life screens. Big announcements are made in big ways with big build ups. A lot of the basic rules of public speaking have been tossed out the window along with the dress code. Do filler words like “um” and “ah” really matter anymore? Can you start a talk with a “thank you”?

For those who like the more traditional aspects of public speaking, the not-so-bad news is that unless you’re presenting at MacWorld, SXSW or a similar venue, the standard rules of public speaking still apply. But that doesn’t mean you can’t take a page from Steve Job’s book on speaking. Have fun with your audience, make your speech more interesting, and try out some technology if it helps better illustrate your point. Or even just add a little more creativity to your talk to make it more interesting and enjoyable for your audience.

Steve Jobs was widely accepted as a visionary when it came to technology. But he was also a visionary when it came to communication. While he was criticized as much as he was praised, he created a work environment at Apple that was stressful and internally competitive but turned it into the largest technology company not once, but twice. Here is an examples of one of his talks:

In this other clip, Steve does an amazing job handling an aggressive questioner: