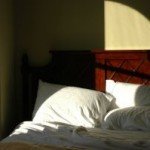 I couldn’t sleep one night last week so to be productive, I decided to follow up on some emails. Many of these emails were things that I had put off because I wanted to word them the right way. For example, I had to nudge a few people who I was awaiting a response from. But that night, I didn’t seem to care; no more beating around the bush – I was direct and to the point.

After that, I logged into the various social media sites to see what my friends were up to and saw some posts from friends from high school. I immediately thought about how life would have been different at that stage of my life had I had social media. No more waiting until school the next day for communicating – I could just send an email whenever. And that got me thinking about how today’s technology could have certainly made things interesting back then.

Whenever I‘ve had something on my mind, I’ve always found it easiest to resolve it while lying in bed at night. Maybe it’s the peace and quiet. Maybe it’s because I’m relaxed and able to focus. Or maybe it’s because being tired has the same effect on me as alcohol has on others — it makes me toss away my inhibitions.

When I think back to my younger years, I’m amazed at how at night I could find the right words to convince that perfect girl to go out with me or the best way to talk a teacher out of giving me a bad grade. Of course, by morning I’d find a way to talk myself out of it. Just like the effects of drinking “liquid courage” eventually wear off, so do the effects of nighttime courage.

Okay, so now that I pointed out that you might be braver at night you’re probably wondering what the point of all this is. Well, you probably wouldn’t be reading this if you weren’t the type of person that was trying to better yourself. So chances are there’s a risk that you want to take but something is holding you back. It could be professional such as signing up for a seminar or applying for a job. Or, it could be personal like asking someone out or initiating contact with someone you had a falling out with.

Now, just like people make fools of themselves when they drink, you can definitely run into issues with doing things that seem like a great idea late at night. In the film “Jerry Maguire,” the title character has an epiphany about an idea to change the world of sports management. He acts on this idea in the middle of the night and ends up getting fired over it. Of course, things work out in the end but that’s Hollywood for you. In real life, things won’t be that extreme but risks wouldn’t be called risks if there weren’t a downside to them.

Sometimes, starting the task during the day and finishing it at night can give you the best of both worlds. For example, let’s say you belong to a group and there’s someone in that group you want to get to know better. You may have found yourself at a loss for words when face to face and you’ve typed up half a dozen emails that you chickened out on sending. Type the email up during the day saying something sensible like “I really enjoy being a part of this group and I want to get to know everyone. I hope you don’t mind me starting with you, but I was wondering if we could grab lunch or coffee sometime.” And if you can’t muster the courage to hit send, wait until that night and then go for it. Give it a try – you won’t regret it.