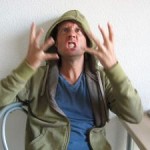 What? Did I just say it’s okay to act like a bad sport after you lose? Well, not necessarily. We live in a culture that unfortunately discourages success. Kids now play sports where there are no scores and some schools are doing away with grades so that the kids that don’t perform well don’t feel bad. Now as adults, we run into situations all the time where we have the potential to be the loser: competing for an account or a promotion, putting an offer on a house or an item on ebay, dating, looking for work or any other situation where there is more than one person vying for the same limited resource.

Society tells us we should lose gracefully, and some personal development “gurus” tell us to change our meaning of “losing” be something ridiculous like “not competing” so that the act of just going for something automatically makes us a winner. But deep down, it hurts to lose. I’ve seen grown men weep after their team has lost a big game — and it’s not just the players, it’s the fans too. While that may seem silly to many of us, we all have competitive areas of our lives that we take seriously.

When you’ve been burning the midnight oil for months and someone else gets the promotion, it hurts. When you’ve met the guy/gal of your dreams and he/she chooses someone else, it hurts. When you find the perfect house to raise your family and someone outbids you, it hurts. Now I’m not saying that it’s okay to make things worse by complaining about the outcome and berating the person that beat you out. But you don’t have to like it. And, you especially don’t have to feel like the better person won if deep down you don’t believe it. I could write dozens of pages about times when I’ve lost when I thought I shouldn’t have (and even some times when I’ve won when I shouldn’t have) and I’m sure you could as well.

So what do you do when you lose? Keep your feelings to yourself — publically displaying your disgust/displeasure will only make things worse. If you need to vent, do it privately to someone you trust. Then when the emotions have settled down, take a look at the situation. Ask yourself what you could have done differently to change the outcome, if anything (and yes, sometimes we get into situations where we simply can’t win). If you can learn from the situation, remember that lesson for next time.

Losing isn’t fun — no sane person likes to lose. But it’s a part of life and we have to deal with it from time. Make the best of it if you can, but don’t ever feel that you need to like the outcome. Use it as fuel to light your fire next time.

It’s Okay to Be a Sore Loser