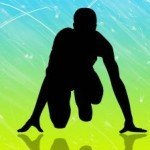 You can learn a lot from a coach. And I’m not talking about life coaches or others that you pay to help you figure out what you really want in life, but the type that wear a whistle around their necks and make you push yourself to be the best athlete you can be. I recently listened to an old interview with legendary basketball coach, John Wooden, and was reminded of some of the things I learned as a student athlete.

Like Wooden, my high school wrestling coach used to talk about the Mentally Tough Competitor. This was someone who could stay focused on the goal, ignore criticism and push themselves to the limit. We learned to focus on the match, not our opponent’s record. We learned to jump up and run to the center of the mat, even if we were completely exhausted, just to psyche out our opponent. And we learned to not give up.

Wrestling matches consist of three two-minute periods — and end sooner when there is a pinfall — a significantly shorter contest compared to most other sports. However, those six minutes can feel like an eternity as you are expending 100 percent of your energy throughout the match – every muscle in your body is often needed to beat your opponent. Showing your opponent that you’re not afraid of them, aren’t tired when they’re tired and are willing to go the distance with them can give you a huge advantage in a sport like wrestling. This attitude also works in business or any other competitive situation.

The most successful people don’t give up when they’re tired — they see the finish line and know that once they reach it, they’ll forget that they were ever tired.

Successful people know that when they’re hit hard, that they are the ones who get to choose whether that blow will be a fatal one.

Successful people know that giving up before the contest has begun is the worst type of failure — sometimes just showing up is half the battle.

Remember that success is a state of mind. You can’t control the world around you, but you can control how you view that world and how you respond to it. Many people lose because they let the other person beat them. They give up when the going gets tough. Success is as much about overcoming obstacles as it is about doings things correctly. I once heard an interesting quote about cream — it doesn’t rise to the top, it works its way up.