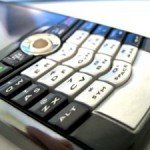 Many people own a BlackBerry, iPhone or other mobile device that allows them to check email, surf the web, check email and update their status on social media sites like Facebook and Twitter from virtually anywhere. Of course that anywhere could be the car, the airport or even while sitting in the audience when you’re giving a speech.

Using these devices all the time is a new, yet increasing, trend – I remember sitting next to a woman at an awards dinner that ignored everyone else at the dinner because she couldn’t put her BlackBerry down. It’s no wonder that these devices are referred to as “CrackBerries” because some folks simply can’t resist checking them every couple minutes.

Even in the business world, people are checking and responding to email with their mobile devices during meetings and presentations. While this has become common (and even acceptable) behavior in some organizations, it’s still rude. And as speakers and presenters, it can be a complete distraction – especially if you’re not exactly comfortable with public speaking. So what can we do?

It’s common for many speakers to remind their audiences to turn off the ringers on their cell phones prior to their talks, so this is a great opportunity to also ask them to refrain from texting or using mobile devices during the presentation. If you’ve got someone introducing you, you could include a line in your introduction such as “and please refrain from using your BlackBerry or other mobile device during the presentation as it can be a distraction for the presenter.” You could also mention that it’s rude if you’d like since someone else is reading it for you.

If you don’t have someone introducing you (maybe you’re giving a presentation at work), then you could use a little humor by saying “I know you’ll be tempted to play with your BlackBerry during my talk but if you could just hold off until I’m do ne with my talk, you’ll get the most out of it and won’t be a distraction to others in the room.”

Sometimes we miss that opportunity to ask our audience to be respectful before our talk or we have a nervous person introducing us that forgets about our introduction all together. If the latter happens, you can always make a joke at the beginning like you would if you didn’t have someone introducing you. If you’re speaking and you notice people whipping out their BlackBerrys on you, then you need to address it.

The first thing you could do is make a joke out of it while singling out the person. You obviously don’t want to do this in a work environment if the person being rude and disrespectful is your boss or someone else above you on the food chain. But in most cases, you can ask the person to look up a fact from your talk, check on the status of a big event (even a sporting event) or ask them to check the stock price of a company that has something to do with your talk. In other words, you’re politely telling them that you noticed they’re playing with their toy while they were supposed to be listening to you and you’ve made the rest of the audience think twice about doing the same thing.

If you notice a lot of people pulling out their devices and typing away during your talk, you could call for a break. Again, try not to say something like “since no one is paying attention to me anyway, let’s take a break.” Instead, try “it looks like a lot of you have some important messages to check on. Why don’t we take five minutes so that those of you that need to check your messages can do so and then when we come back, we’ll be able to focus more on this issue.” Doing this makes them realize (hopefully) that they were being rude and disrespectful but without you looking bitter.

So you gave a talk and people in the room were too busy checking email. Do you feel hurt and want revenge? Email them this article (just click the link at the top that says “email this to a friend”) so they’ll understand that it’s not appropriate to be ignoring the speaker to check email. If you’re truly evil, you could use the person’s boss’ name as the sender of the email, but I don’t condone such behavior (even though it’s probably well deserved).

You could also approach the person (or people) but then you’re more likely to get into a confrontation with them. In that case, you’re probably better off returning the favor when they give a speech (just kidding) or emailing them this article from “a concerned friend” (not kidding).

As speakers and presenters, our talks are always prone to distractions and other problems. It comes with the territory and should be expected. The best thing you can do is let it slide and move on with your life making a mental note to ask the audience to give you the same respect during your talk that you would give to them. Life is too short to let small things like this get to you so just feel bad for the person being rude and be glad that you know better. And if you really need to, email them this article using their boss as the sender with the note “please don’t do this again, it was disrespectful.” Hey, if it makes you feel better – who am I to stop you, right?

One thought on “Don’t Let BlackBerry Addiction Ruin Your Presentation”