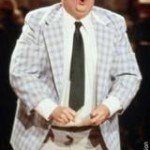 The bottom line is this: you should always respect your audience. Start with your appearance — dress appropriately and neatly. Then make sure you speak to them as you’d like to be spoken to. Talk to them, not at them. Don’t make them feel bad because they don’t follow sports or the latest hot TV show. Watch this full clip of Matt Foley and make sure you don’t do anything he does. And yes, while he may accomplish the goal he was hired for, keep in he won’t be getting re-hired and probably won’t get referred either. Best of luck.

Don’t Be a Matt Foley Speaker