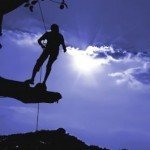 I think most people naturally fear taking risks. There’s so much unknown and so many things that can go wrong. Plus, whenever someone takes a foolish risk and falls flat on his or her face, the story of it travels through that person’s network at lightspeed. So add ridicule and embarrassment to results often associated with taking risks.

The topic of risks came up with a few friends recently and I was asked about the worst risk I ever took. While I searched through my memories for the typical things that come to mind like asking out a girl who was way out of my league or investing time and/or effort into a startup, I couldn’t really find anything. Whenever I took social risks when it came to things like dating, I usually was glad about taking the risk — even if things didn’t work out in my favor, I knew to move on. As far as professional risks went, I’ve made my share of blunders with speeches, networking events and even with some of the classes I first offered when I pushed myself beyond my limits. But the blunders were only part of the story — for each of these blunders, there were a number of successes (sometimes just small ones) but these successes (and even mistakes) resulted in a learning experience.

So then what was worst risk I ever took? My worst risk was standing on the sidelines for the first part of my life: being afraid to ask out that girl who looked like a swimsuit model, being afraid to go to a conference or job fair when I was looking for work and being afraid to approach powerful people that could have launched my career into the stratosphere.

2002 was the year that everything changed for me. A great example of this was during that summer when I took a daylong seminar on management skills at a hotel. When we broke for lunch, I walked over to the restaurant within the hotel and stared at the menu posted by the door (I’m a very picky eater so I always do this before walking into a restaurant). I noticed a woman from my class doing the same thing so I struck up a conversation with her and invited her to join me. She accepted just as a group of several other women from the class walked over so I extended the invitation to them as well. We all had a nice lunch together and had some fun conversations.

Now compare that with the summer before when I didn’t take risks. I went into Boston for an all day seminar on entrepreneurship. At the session before the break, I saw a number of people sitting by themselves that I could have invited to lunch but I was afraid to. So I had lunch all by myself that day. Had I taken a risk, what was the worst that could have happened? Someone could have said “no” — that’s all I can think of.

In my classes I teach attendees about the importance of knowing what works best for you. I sometimes offer two or more ways to deal with a task or overcome a fear and ask people to try them all out to figure out what works best of them. I’ve put this to practice in my own life as I know what works for me and what doesn’t. And truthfully, when it comes to risk there is still a part of me that wants to run away from it. So one of the things I’ve found helpful is to take that risk right away before I have a chance to talk myself out of it.

I wish email, cell phones, texting and social media existed when I was in high school because I found myself bravest at night. That’s when I’d have a Jerry McGuire—like idea that I was itching to take action on but back then, I had to wait for school the next day to take the action. I remember lying in my bed working out the words that I’d use to ask a girl out or to mend a broken friendship or talk a teacher about something bothering me. But by morning my senses would set in and then I’d either talk myself out of it or lose my courage.

Today, I catch myself over-thinking things. Maybe I want to connect with someone or post something that’s more of a personal story rather than a self-help article. I may decide that it’s too crazy of an idea or it doesn’t fit in with the image I’m trying to project. And in the case of connecting, sometimes I fear that I’ll get rejected by the other party. But I found a trick to help me with this. I just do it before I can talk myself out of it. Yes, it’s that simple.

Of course, from time to time I do things that I sometimes wish I hadn’t, but it’s usually small stuff. Things like client negotiations, course development and marketing copy are all things that I make sure are well thought out – no impulse risk taking there. But adding someone I haven’t talked to in fifteen years as a friend on Facebook and sending them a cheesy message about the good old days — well, if that’s the worst someone can fault me for then so be it.

So the next time you’re faced with something that seems risky (and as long as no one’s safety is involved), think about the risk of not giving it a try. So what if you get up in front of a group of strangers to sing karaoke and they laugh at you. So what if you try to connect with someone on a social media site and they ignore your request. A friend of mine once said that with seven billion people on this planet, it’s okay if a couple hundred million don’t like you. So give it a shot — you won’t know what could come out of it until you do.

The Worst Type of Risk