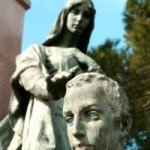 Life is not fair – it never has been nor will it ever be. Unfortunately, one of the most unfair parts of life is that occasionally, we’re treated unfair by others. Sometimes there’s something bothering them and we’re in the wrong place at the wrong time. Other times, the person is simply mean spirited and inflicts pain on whoever he or she comes into contact with. Whatever the case, the worst thing we can do is allow that pain to hurt us over and over again.

Growing up I was the type of person to carry a grudge. When someone wronged me, I wanted revenge – with interest. Yes, it wasn’t enough to simply clear my name or collect my damages, I felt the need to destroy the other person. As soon as someone did something bad to me, I’d start plotting my revenge. It would consume me to the point where I’d be so angry, the mere mention of the person I was angry with would result in a verbal diatribe that could only be described as hateful. I became a miserable person to be around.

You would think that the person must have committed some heinous crime against me. But it was usually something like embarrassing me in front of someone I was trying to impress, insulting me or stealing something of minimal value from me. And embarrassingly, it may have just been something I heard through someone else. It didn’t matter – an enemy was an enemy.

Now as I’ve grown up and matured, I’ve become a lot better at dealing with these types of things. I still demand that wrongs be righted and expect to be treated fairly. But when someone wrongs me, I don’t obsess about it and plot revenge. Instead, I take whatever action I need to so I can right the situation and then move on.

But this year, I’ve done something that I’ve found very liberating. I’ve decided to modify a Christmas Eve tradition that many U.S. Presidents follow during their last Christmas in office — pardoning folks. Now, they usually aren’t pardoning those who have wronged them (usually it’s friends who have wronged others or the country in general). But I like the concept of a Christmas Eve pardon and I plan to make it a yearly tradition.

So this year, I have officially pardoned almost everyone who has wronged me in the past (there are only three I couldn’t forgive, but that’s a story for another time). Looking back, there were people that I’ve been mad at for years but I can’t even remember why so I know it can’t be that important. And honestly, it feels great — it’s the best Christmas gift I’ve ever given myself. Given that I am far from perfect, I hope that those I may have wronged through the years can do the same (or at least accept my apologies). Merry Christmas.

The Power of Forgiveness

3 thoughts on “The Power of Forgiveness”