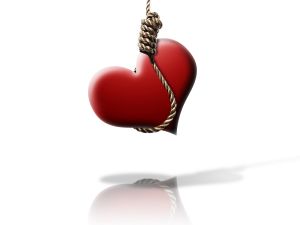 I recently heard an ad on the radio that shocked me. It was for a divorce lawyer and it was actually encouraging people to get divorced. “Marriage not turning out the way the you like it? Call us!” was among the foolish statements the ad boomed. The ad boasted that over 50% percent of marriages in the United States end in divorce so why not see what all the buzz is about. To completely throw the ad into the gutter, it ended by asking the listener to visit a website — which had a cheesy domain name like 99divorcenow.com.

There were a lot of things I disliked about this ad, so let’s look at each of them separately.

It played into the “Lawyers are heartless” stereotype:

Most divorce lawyers understand that a divorce is a delicate and complicated situation for most people. It’s more than just going to LegalZoom.com and using your PayPal account to file the forms. So in a world where many people have the negative perception of lawyers being heartless and only caring about getting your money, this ad just strengthens this belief.

Now I work pretty closely with several lawyers (and one my best friends is a lawyer) so I have respect for the profession. Most of the ads for divorce lawyers talk about how painful a process it is and understand that it can be an emotional situation. This ad on the other hand treats it like going down to a used car dealership and selling your old clunker. I honestly can’t believe that anyone listening to the ad would actually consider using the service – all inquiries must be from people wondering if it were a skit from Saturday Night Live.

It provides bad advice for the consumer:

I can’t speak from experience because I personally have not been through a divorce but I have had several friends and family members that have gone through it. It’s a tough process, especially if a house, business or children are involved and most people use divorce only as a last resort. Taking a divorce lightly as the ad suggests is as good an idea as taking out an interest only mortgage on your house. It’s not something you would do spur of the moment — especially using a company that sounds shady.

I don’t know if there’s a domain name shortage or a lack of creativity for people starting businesses but there’s something that bothers me about cheesy domain names. Money4U, divorce99now, makemoney2008 and other domain names along these lines just shout “scam.” The URL in this advertisement is along the lines of the “get rich by working two hours a week from home” commercials that are typically only aired at 3AM.

The ad implies that you’re an idiot for staying married if you’re the least bit unhappy. Why bother accepting the reality that relationships have ups and downs when you can dump your spouse after having an argument and find someone else. Perhaps the company is looking to get repeat business out of you and may offer volume discounts.

Treating your audience as if they’re dumb if they don’t act right away is a questionable form of high pressure sales. Sure, it’s common in some industries but it’s bad practice because you’ll never get repeat business by intimidating someone into a sale.

This ad doesn’t do anything right. It worsens a negative stereotype for its own industry — imagine a politician running on a platform such as “sure I lie a lot, but not nearly as much as everyone else in congress.” It takes a delicate and emotional situation and treats it in an insensitive manner — perhaps funeral homes can position themselves as getting your loved one buried and out of your way the fastest. And finally, it disrespects the prospective clientele — high pressure sales are common in business to business transactions but not in divorces.

It’s important to differentiate your business from your competitors, but don’t make a fool of yourself in the process.