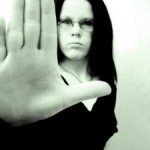 So let me start with my story. I was driving on a two lane road in the left lane and another car merged into the right lane. I needed to take a right turn about a mile down the road so I put on my signal to get into the right lane. This other car sped ahead so I couldn’t switch lanes but then the car in front of her slowed down so I sped up and got into to the lane two cars ahead of her. When it was time to take the right turn I started moving over and noticed the other car trying to cut off some cars by going in the bicycle lane (and practically on the sidewalk). She got behind me and essentially tailgated me for about two miles – even though I was keeping up with the car in front of me. When I made a left turn and got away from her, I noticed she stuck her middle finger up at me.

At first, it bothered me because, like most people, I generally try to be good to everyone. I don’t think anyone likes it when someone else is mad at them. But then as I thought more about it, I realized how much of a jerk the woman was (remember, I’m trying to be professional here) and how there are certain people that you are better off not having in your life – both personally and professionally.

On the professional side, a common mistake that many business owners (both small and large) make is to try to please everyone. But truthfully, some people are just bad customers and you’re better off letting them go to your competition so they can deal with them. I had a woman take one of my classes a few years ago that was a perfect example of this. I was teaching a hands-on technical class and this woman needed a lot of hand-holding – to the point where other attendees were starting to get annoyed with her. It was a two session class and she contacted me after the first session to tell me that she had decided to drop out of my class and take another one that was closer to where she lived (the first thing she said when she came into the room was a complaint about how far she needed to drive to get to my course). At first, I was a bit upset when she decided to drop the class (and request a full refund) but then I realized I was better off without her. In the second session, some asked if we were going to wait for her to start and I informed the group that she had decided to drop the course. Several people in the room then shared that they were glad she left because they felt she held up the rest of the class.

It’s funny because when I first started out as a speaker, I used to give a talk about “Devil clients” – clients that you’re better off dumping because they just make your life miserable. I talk to too many business owners that bend over backwards for these types of clients, only to get burned in the end. Ten years ago, I worked for a decent-sized company that made this same exact mistake several times. One of our services was to provide a data feed and this one client requested about $30,000 in customizations on a feed that they paid $1000 for per month. I used to get paged in the middle of the night because they had a problem on their end that prevented the feed from going through, and instead of checking it, they’d call me and I’d check it for them. I hated them with a passion and even shared my concern with the executive in charge of my division (my boss did the same). And sure enough, they dropped us after three months. So we spent $30,000 in effort to get $3000 in revenues.

The bottom line is that sometimes when people don’t like us, don’t hire us or choose to bring their business elsewhere, it’s for the better. Obviously, you need clients – you can’t just dump them all even if they’re all bad or you’ll go out of business. But if you get to the point where one particular client seems to drain 80% of your resources so you can’t focus on your good clients, you might want to consider dropping them.

The same holds true with relationships – sometimes some friendships take more effort to maintain than others and you’re better off spending your time elsewhere. One of my friends recently complained to me about a mutual friend that’s always criticizing, judging, complaining and such. My friend felt belittled and just uncomfortable whenever there was any contact with this person. The reason why people tend to put up with this nonsense is because they don’t want to lose a friend, even if it’s an unhealthy relationship.

I gather a lot of feedback from my classes – I used to do three forms but now I’m down to just two. While most people like the classes, there are some that don’t. It took me a bit of time to get over this fact – even the most successful speakers have their critics. Sometimes the problem is me (and yes, I admit I make mistakes and try things that aren’t always successful) but sometimes the problem is the person. Whenever I get bad feedback, I do my best to look at it objectively to see if I can learn from it – and my classes have gotten some changes because of these lessons learned. But I’ve had my share of people that you can never please so I take their negative feedback as a complement – if they liked me, then it would have meant that I did something wrong.

So next time you’re in a situation with a fellow human being where you feel that you’re unliked, don’t sweat it. Look at the situation and if there’s something you did wrong, learn a lesson from it. Otherwise, take it as a complement. There are seven billion people in the world so you only have to worry when you have a few billion people dislike you.