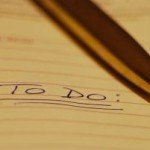 To do lists really are useless. The remind me of the pile of junk mail on my desk — they keep growing and growing until I finally get frustrated and just wipe it out. Throughout the years I’ve experimented with various type of to do lists: paper based, electronic and I even created several types of my own. But I’ve found a tool that’s been around a lot longer that works much more effectively: the calendar.

Yes, you can go crazy with creating lists and it’s a good exercise to start. But there’s something about checking off a task only to add three more that can be quite discouraging. Plus, you need to keep checking your list and sometimes you don’t have enough time set aside to get to a task so you put it off and then the next day’s tasks begin and so forth and before you know it, you’re overwhelmed.

So I’ve decided to get rid of my to do list and instead put tasks directly in my calendar. If something comes up and I can’t get to it, I reschedule it. If I can’t finish it in the allotted time, I schedule time to finish it. I find this to be very effective for most small or independent tasks.

For larger projects, I use either project management or notebook software to break things down into manageable pieces. For example, when I create a new course I’ll create my outline in the notebook software and then schedule time for the various tasks in my calendar. Sometimes I’ll even schedule brainstorming time so I can focus on that particular project as a whole. The great thing about using the calendar is that I have it integrated with my phone and computer, so both nag me whenever I have something to do. I teach these principles (in greater detail) in my Goal Setting Class and the feedback I’ve received from the people who have tried them has been overwhelmingly positive.

The nice thing too is that if I think of something I need to do, I can schedule it right away and make sure that I’m not overwhelming myself. It’s one thing to give yourself a list of ten things to accomplish in a day — it’s another to take a look at that list and figure out just when you’ll fit them into whatever time you have available.

So should you toss out your list? Again, lists are great way to organize things and make sure you don’t forget them. But if you don’t take that last step and actually allocate time to do it, you’re shooting yourself in the foot. Even if you schedule an hour every Sunday night to schedule and organize tasks for the week, you’ll see your productivity jump. And while we’re on the topic of tasks and productivity, try doing tasks right away before they even become a task. Rather than take the time to schedule paying a bill, just pay it and be done with it. Sometimes, it takes just as much time to quickly do a task as it does to fuss about it and write it down.

To Do Lists Are Useless

One thought on “To Do Lists Are Useless”