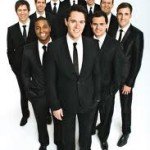 One of the coolest things about social media (and the internet in general) is how it gives everyone a chance to be seen and heard. Anyone can be a celebrity — and these days, it feels like practically everyone is ( which is why people in Hollywood one-up each other in stupidity to gain attention). YouTube alone has put Arnel Pineada in Journey and made Justin Bieber and Gangnam Style household names. But it also has exposed millions of people to thousands of other singers, bands, comedians and yes, even motivational speakers.

One such act is a group of ten guys that formed an a capella band at the University of Indiana in the mid-1990’s. While people come and go from their lineup, Straight No Chaser has demonstrated their amazing talents with a US tour and a summer stint at Harrah’s in Atlantic City. I recently came across a video that demonstrates that in addition to having an abundance of talent, they also have an abundance of class.

Here’s a video of them wrapping up a show:

In this video, they do some things that I find amazing:

Contrast this with the people who unfriend you on Facebook while inviting you to like their fan page or the people on Twitter who follow 100,000 people so they’ll get followed back, only to unfollow everyone. Yes, there are a lot of needy people in the world who will attach themselves to a celebrity or group so they can feel included. But that only gets you so far. People remember two things: what you do for them and how you make them feel.

The people with the strongest followings have perfected reaching out to large groups of people and striking a chord with them. Actors and musicians put on a performance that resonates to the point that it makes an emotional connection with their audience. Politicians provide laws, funding or assistance that is never forgotten by their constituents.

Many online celebrities sell dreams and feelings in the form of products and services. Â If you join their mastermind group, you’ll meet others like yourself and you’ve got your feeling of belonging. If you buy their product, you’ll feel good about the journey regardless of whether or not you reach your destination.

The point I’m making is that if you want to create a lasting following, it needs to be a two-way street. The more effort you put in on your end, the stronger the connection will be and the longer it will last. Yes, it’ll take you longer to build up your fan base, but it’ll be a stronger base that won’t desert you when you go through a rough spell.

Sometimes you have to go against traditional thinking. Straight No Chaser, like the Grateful Dead, allows people to record their performances. I suppose there are some people that may not buy their music or attend a show because it’s online, but those people aren’t usually the type that would promote your brand anyway. On the other hand, all of these videos being uploaded to YouTube and shared via social media are reaching people that they’d otherwise not reach.

Of course, one can always it take it too far and become a pest to your fans. There is something to be said for the aura of celebrity and always being out of reach that creates demand. People that are always accessible don’t have that aura and if they are too accessible, it can work against them. Staying after a show to meet fans is the perfect balance. If two hours after the show, one of the band members ran up to you in the casino to say “hi” it might seem either cool or weird depending on your personality. Â If they did it again an hour later, it would work against them. Even the biggest celebrities could probably get away with it only three or four times before they became a pest.

Amassing fans is more art than science – there’s no checklist to follow. Like anything else, experiment and take risks. Note what works and what doesn’t and make adjustments. If you make a mistake, learn from it and get back in there. Before you know it, you may be surrounded by loving fans. And who knows you might even find that a celebrity might be a fan of you.

You may recognize the woman on stage with them as actress Goldie Hawn – she was in the audience at one of their shows.

Straight No Chaser – How to Act Like True Celebrities