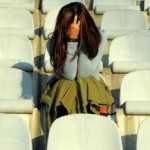 Giving a speech can be a time of high emotions. Yes, public speaking is the number one social fear so a lot of folks probably want to cry when they give a speech. And even the most experienced speakers feel a bit nervous and give speeches that don’t go as well as they had planned. So I guess everyone has the potential to want to cry during a speech. But on a more serious note, there are other times when giving a talk might get the most of our emotions. The question: is it appropriate, or professional, to cry when giving a speech?

As usual, my answer is “it depends” – I know those of you who are regular readers of this blog probably predicted that answer. Obviously, it’s okay to show emotion when giving an emotional speech such as eulogy. Many people get so emotional during this particular type of talk that they can’t continue, and that is totally appropriate.

Another appropriate situation can happen when the speaker is talking about loved one that is sick, dead or dying and the condition is fairly recent. Along the same lines, if the person went through a tough time such as a layoff, accident, divorce, depression, attempted suicide or similar situation that reflects a time in the speaker’s life of extreme emotional pain, it’s okay to share emotion.

It’s not appropriate to show emotion for the sheer sake of being a drama queen – and this is where that fine line is crossed. I remember talking to someone who had made it very far along in the Toastmasters International Speech Contest. He said he panicked at regionals because he was the only one that gave a speech where someone wasn’t sick, dead or dying. Now I’m not suggesting that his competition was faking emotion for the sake of winning a speech contest, but let’s face it – it does happen. People that are looking for attention or sympathy from their audience will play the “emotions card” – sometimes as a desperate play to win back an audience that they lost. And even worse, some people fake emotion for the sake of selling something or getting their audience to take action.

Network Marketing and Multilevel Marketing meetings tend to be the biggest offenders when it comes to emotion. The few times I’ve attended these types of meetings (mainly for natural products), some of the people that spoke told tearful stories of how the product changed their lives or saved their child or the program gave them a positive reason to quit their drug habit. I didn’t buy it, but the audience sure did.

I don’t have a problem with a speaker showing emotion as long as those emotions are real. Personally, I don’t cry during my speeches because that’s just me – if I feel a particular topic might get me emotional, I won’t go there. I will say, there have been times when I’ve been close. My Toastmasters club honored me one night by making me the theme for the meeting. I’ll never forget that day because it was one of my toughest days due to a personal problem (I’m still not ready to share the details with the world, but it was a life or death situation which fortunately worked itself out). It was totally unexpected and I almost didn’t attend the meeting, but I’m so glad I did.

The other times that immediately come to mind were the first few public speaking classes I taught. On the final night, I had people do a short speech putting together everything they learned in the class. A number of people chose to use this opportunity to public thank me and share the positive impact that my class had on them. I remember in one particular instance, I was sitting in the audience and the woman next to me was in tears and kept looking over at me, nodding her head and smiling. I was so touched I was at a loss for words. So even if you’re like me and emotions aren’t part of your method of operations, keep in mind that you might get caught off guard.

So emotions are yet another tool in your speaker’s arsenal. It’s up to you how you use them, but at least you know it’s one way to connect with your audience. While I do have a problem with people faking emotion, what you do during your speeches is your decision. Like any powerful tool, you’ll want to use it wisely.

Crying During a Speech

One thought on “Crying During a Speech”