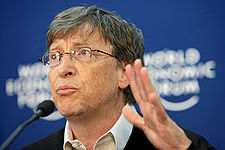 So you’re the richest man in the world (or number 2 depending on the stock market) and you’re giving a talk on malaria at the TED conference. How do you get the audience’s attention and keep it? Unleash a swarm of mosquitoes on the crowd and say “there’s no reason only poor people should be infected.” Has Bill gone crazy since his retirement from Microsoft?

Of course the mosquitoes weren’t carrying malaria, but I’m sure quite a few audience members were a bit antsy as the swarm of flying bugs was unleashed. Was this a good idea? In my honest opinion, yes and no.

I think that this was by far one of the most attention getting uses of a prop that I’ve heard of. If anyone wasn’t paying attention to him before he let the little pests loose, they sure were paying attention to him afterwards. The trouble with props is that most speakers don’t use them right. They take out the prop, let it sit in plain view and then begin their talk while the audience wonders what the prop is for. Then they use their prop, return it to a position where it’s still in the audience’s view so they can focus it while the speaker concludes their presentation.

Since I didn’t see Gates’ speech, I don’t know if he made this same mistake or if he revealed the container right before he unleashed the insects. Certainly, the bugs were probably flying around and bothering audience members for the remainder of the program.

Overall, I thought it was a brilliant idea. However, unleashed biting insects on to the crowd is also a not so bright idea. It causes discomfort, distracts the audience and could open you up to litigation — for example if the crowd got rowdy or someone got bit and had a reaction.

Fake insects in the form of small shreds of paper coming from the ceiling would have been a better choice as you minimize all risks while still having the same impact on the audience. But so far, no reports of problems related to the bugs have emerged so Bill gets an “A” for this brilliant and effective use of props.