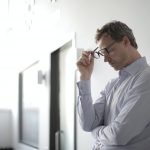 Do you feel nervous whenever you’re asked to give a speech or do a presentation? Does the thought of getting up in front of an audience terrify you? Have you found yourself turning red or feeling hot before a speech? Then you’re in good company because most people have anxiety with public speaking. You’ve probably heard that public speaking is the number one social fear – some people fear it even more than death!

What causes anxiety with public speaking?

The short answer is a fear of failure, but there are many factors. Some people are uncomfortable with being the center of attention. It can be a little scary to have dozens, hundreds or more eyes focused on you. Others are afraid that they’ll make a mistake and embarrass themselves in front of a big group. After all, when you say something incorrectly in a one on one conversation, only one person hears the mistake.

Many people are afraid of the fear itself. They worry that they’ll freeze or won’t be able to talk. Other worries include the audience not agreeing with their message, or things beyond their control happening – such as a technology malfunction. So what can you do?

Practice speaking in front of groups:

In order to get stronger in anything, you need to do things that make you uncomfortable. When you do things that make you uncomfortable, you train you mind that you can overcome fears. Now, I wouldn’t suggest getting up in front of thousands of people – that might be a little much. Start with a group of three or four people. You’ve probably done this casually such as having a conversation around a table with friends. If you think about it, giving a speech to three or people is really not much different than a conversation. So ask a group of friends if they’ll sit and listen to you give a speech.

Remember – the only way to truly deal with your fear of speaking is to speak to groups regularly. So work your way up from smaller groups to larger groups. And speak often.

The more you practice your speech, the more confident you’ll be in your ability to deliver it. If your anxiety stems from a fear of messing up, practicing will help build your confidence. The better you know your material, the less likely you’ll mess it up. If you need help with writing a speech, I have several articles on the blog to help you with things like creating an outline or writing a powerful conclusion.

But the key is to practice. If your speech is short, try to practice it at least ten times. You should run through a longer speech at least two times but practice the areas that trip you up several times until you get it right.

Pay attention to what you say to yourself and think about yourself. Focus on the positive – you’ve practiced your talk enough so you know you’ll do a good job. Don’t focus on the potential problems or things that can go wrong. If you’re really concerned about things going wrong, make a two column list. List everything you’re concerned about in the left column. Then use the right to list out what you can do about them. How can you fix or prevent them from happening?

If something goes wrong:

Sometimes the best way to put your anxiety to rest is to make a mistake and survive it. I’ve given horrible presentations where I was unprepared or just plain off. It happens. So just get up, dust yourself off and realize that you survived the worst.

Some other quick tips:

I offer both an in-person course and an audio program on overcoming your fear of public speaking. The in-person course will guarantee you can speak to a group of 20 people by the end of it. While the audio program isn’t a replacement for giving speeches, it will give you some solid advice to help you take steps to overcome your fears.

Anxiety with Public Speaking? Here’s How to Deal with it.