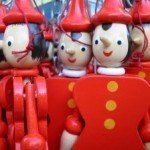 Have you ever noticed how often people lie during a given day? From “that dress makes you look slim” to “No Officer, I didn’t realize I was speeding” many of us are guilty of “white lies.” A while back, I actually decided to take a conscious look at my own white lies and was surprised at how many I was telling.

Fortunately, most of my white lies weren’t serious enough to need cover up lies. Lies have the tendency to multiply as you need to tell other lies to cover up the first one, and depending on how bad you are at lying, you could end up making up your own fictional story that requires you to kill off characters to make it believable.

Your best bet it to be truthful from the beginning. My own informal survey showed that the biggest source for lies is turning down social events so we’ll talk about that. How many times have you been invited to something that you didn’t want to go to so you said you had other plans – even though you didn’t? So then you have to make up an event and pretend that you went to it — and of course, make sure that your status on the various social media sites reflected that you were where you said you were. Then you need to answer questions about the event when people as how it was so you need to make sure your stories and details are consistent. Lying can be a lot of work.

Instead, try to think about why you feel the need to lie. Is there something about the person inviting you, others that might be there, the cost or distance or the timing that bothers you? If so, tackle the issue now instead of prolonging it. If you’re single and are invited to an event that only couples are going to, be honest and say that you’re planning on going somewhere where they are other single people. If the cost is more than you’re willing to spend, tell them it’s not in your budget. No one will fault you if you do it in a tactful manner.

I run into this problem all the time and I’ve found that being honest has really helped me. For example, I don’t like certain kinds of foods so I’m often invited out to lunch or dinner at places where there’s nothing for me on the menu. I used to make up excuses because I didn’t want everyone to change the restaurant on my behalf (especially if I knew someone else really liked the place). What happened was that I used to make up a lie that I had other plans and then it would eventually lead to other lies until it became obvious that I didn’t have plans. So the people inviting me thought I didn’t want to spend time with them. When I finally came clean, things worked out a lot better. Instead of lying, I simply told them that I’d enjoy their company, but it’s not fair for me to limit their menu choices.

So the next time you’re faced with a situation that calls for you to lie, think about why you would need to lie in the first place and try to address the issue.